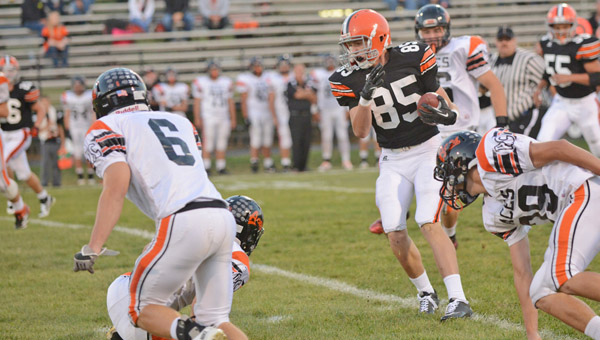 Putnam Stadium has been a “House of Horrors” for the Ironton Fighting Tigers.

Ironton leads its series with the Ashland Tomcats 44-30-3 including a 27-17 win last season at home.

Turnovers were the difference in both games. Ironton lost four fumbles two years ago and they lost three fumbles, missed a short field goal, dropped a touchdown pass and an interception in the 26-12 loss.

That kind of play creates a concern for second-year Ironton head coach Mark Vass, especially since it is the young Fighting Tigers’ first road game of the season.

“Ashland always has a good team and they play well at home like most teams. When you’re in a game with a good team — or any team for that matter — you can’t afford to turn the ball over and expect to win,” said Vass who won his first Ashland game 27-17 last season.

“We have a young team and we’ve been prone to mistakes and that worries me even more when you consider the problems we’ve had the last two games over there.”

“Obviously, you have to be concerned about Baker. He’s a nice player and he can hurt you in a split second,” said Vass. “But you can’t forget about their other guys because they’re pretty good and they can hurt you as well.”

The Tomcats opened the season with a 37-26 loss at defending Class AA state champion Newport Catholic. Baker ran 13 times for 236 yards including touchdown runs of 80 and 46 yards.

The Tomcats’ defense has had trouble against the run most of the season, but last week they allowed Russell just 183 yards rushing and a mere one yard passing.

“They’re getting better. They have a couple of nice linebackers and they get after you up front. The secondary pretty much shut Russell down. It’ll be a challenge,” said Vass.

In the secondary, the cornerbacks are junior Shawn Gilliam (6-2, 175) and McGranahan with the free safety Queen or sophomore Dylan Blevins (5-10, 175).

HOUSTON (AP) — Jay Bruce got off to a slower than expected start this season. He soon warmed up, and... read more