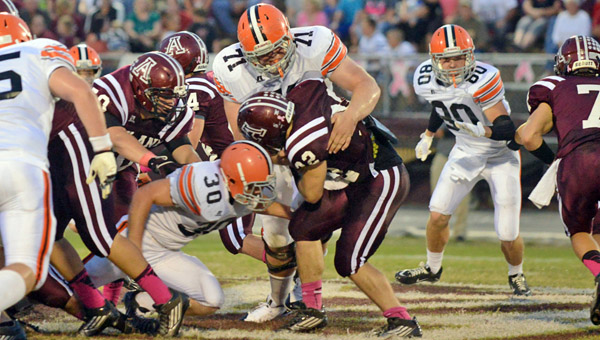 ASHLAND, Ky. — Putnam Stadium has become a “House of Horrors” for the Ironton Fighting Tigers.

Ironton had four turnovers Friday to run their total to 11 in the last three visits to the home of the Ashland Tomcats. The score might have been different but the result was just the same as the previous two trips as Ironton lost 42-20.

“It all goes back to execution,” said Ironton coach Mark Vass. “The first half was a pretty even match. We were going back and forth. Both offenses were moving the ball. Then we had a couple of turnovers. You can’t do that in a tight ball game.”

Ironton (2-2) had 320 total yards with 222 coming on the ground. Quarterback Tristan Cox ran 14 times for 114 yards and a touchdown and completed 8 of 21 passes for 98 yards with two interceptions.

“Ashland is a solid team and Baker is an outstanding back. We knew that going in. He made some big plays and that was a concern for us going into the game,” said Vass.

Cox went 64 yards on the first play of the game to the Tomcats’ 6-yard line and he scored two plays later for a 6-0 lead.

Ashland came back with a 65-yard, nine-play drive keyed by a 36-yard Hunter Prince run.

Prince also went the final yard for the score and Robert Wesley’s conversion kick gave Ashland a 7-6 lead at the 7:15 mark.

Tanner Price ran the kickoff back 22 yards to the Ashland 46 and Ironton scored eight plays later on a 4-yard run by Jake Long with 2:57 on the clock. Long ran for the conversion and Ironton led 14-7.

Cox had a 46-yard punt that put Ashland back at its own 9-yard line and a penalty pushed the ball to the 4. But Baker ran right, escaped two tacklers in the backfield and raced 96 yards for the touchdown. The conversion kick failed and Ironton led 14-13.

The turnover bug bit Ironton two plays later as they fumbled the ball away at their own 40. Baker scored on the next play and also caught the conversion pass as Ashland went up 21-14 with 9:51 left in the half.

Ironton drove from its own 13 to the Ashland 16. Cox threw a desperation pass on the final play of the half that was intercepted as time expired.

The Tomcats needed just four plays to score at the start of the second half. Baker went 49 yards for the touchdown with 10:35 on the clock and it was 28-14.

After an exchange of punts, Ironton moved the ball 11 yards from its own 20 for a first down. But Cox’s pass was deflected and Drew O’Brien grabbed the rebound and returned the ball 43 yards for a touchdown and Ashland led 35-14 as time ran out in the quarter.

The Fighting Tigers tried an on-side kickoff but it went just 2 yards and Ashland had the ball at the Ironton 42. A 27-yard run by James Queen got the ball to the 5 and Baker scored on the next play as the lead was now 42-20 with 4:40 left.

The Fighting Tigers were without starting running backs and linebackers Jeremy Bodmer and Desmond Young as well as offensive guard Tyler Taylor. But Vass said his team had plenty of opportunities to win the game.

“There are no excuses. The kids who are in there should know what they are doing. They’re capable of doing it. You like to have (the injured players), but the kids who are backing them up have the talent to do the job. But it wasn’t just them. It was across the board. It goes back to doing your job and being sharper,” said Vass.

Ironton will host Portsmouth on Friday.

Jim Walker jim.walker@irontontribune.com   COAL GROVE — The Raceland Rams used big plays to win. They had to. The Coal... read more