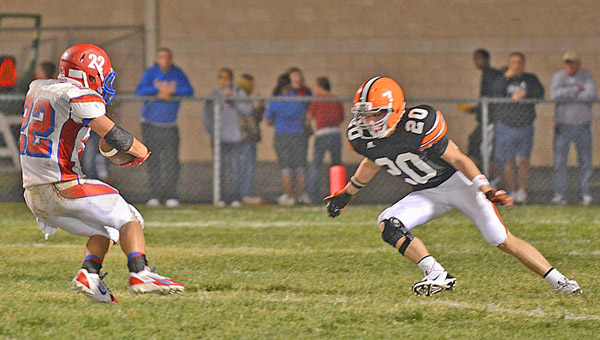 The offense is simple and easy to predict. The Johnson Central Eagles like to run the ball. But as easy as they are to read, they are just that hard to stop.

The Ironton Fighting Tigers (2-3) will get a reading lesson on Friday as they host the Eagles in a 7:30 p.m. game at Tanks Memorial Stadium.

“They’re going to line up and just run the ball right at you,” said Ironton coach Mark Vass.

“There is nothing fancy about it. They are usually double tight end with a wishbone backfield and they just keep coming at you.”

The Eagles — unbeaten through five games — return five starters on offense and defense from a team that outscored Ironton 44-31 last season.

“Young is the new one, but he’s got good speed. He’s pretty elusive,” said Vass. “We know about the other backs. They all ran well against us last year.”

“Their line isn’t as big as it was last year, but it is still pretty good. They come off the ball well,” said Vass.

While the offense is scoring at a 30-points per game clip, the defense has been stingy allowing 14 points a contest.

“They have good team speed on defense. They swarm the ball. We’ll really have ton concentrate and execute against them,” said Vass.

The Eagles like to use a 5-2 alignment led by defensive lineman Patrick Rice (6-2, 265) and Ward at linebacker.

PITTSBURGH (AP) — The Cincinnati Reds have learned how to reach the postseason. Winning once they get there, however, remains... read more