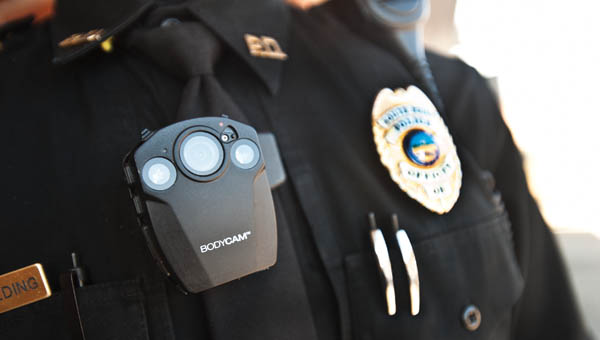 THE TRIBUNE/JESSICA ST JAMES
Members of the South Point Police Department now wear clip-on body cameras while on duty. The cameras are compact and are remote controlled.

SOUTH POINT — The use of body cameras are now in full swing at the South Point Police Department after playing around with the idea for the better part of two years.

“We recently just came up with a policy and made it mandatory for officers to wear them,” Chris Majher, South Point Police Chief, said. “During official business, we require the cameras to be on.”

The cameras have been in use for about a year, although they didn’t really get into full effect until the past six months.

“The first six months, it was more of a trial thing,” Majher said. “In light of everything that has happened throughout our country recently, it really pushed us to be more consistent with them. When you have to give officers something else to wear, it can be burdensome, but they are easy to use and we were used to them after the first six months.”

The officers are required to record official business activities such as traffic stops and arrests.

“We have a computer that is solely for the body cameras,” Majher said. “At the end of each shift, all officers are required to download their footage on the computer with the dates and information.”

Each video is kept in rotation on the computer for 90 days, although they can be on there longer.

“After 90 days, the videos can be overwritten or deleted if space is needed,” Majher said. “Ninety days is just the minimum.”

Footage from body cameras has been used on two occasions within the past couple of months.

“We want this to be equal consideration, that’s the main thing. They are not just for the simple fact to try to exonerate police officers,” Majher said. “It is used for the people, too. If it catches officers in the wrong doing, we will act upon that.”

With temperatures in the low 20s most people wouldn’t think of jumping in a watery hole, but that’s exactly what... read more