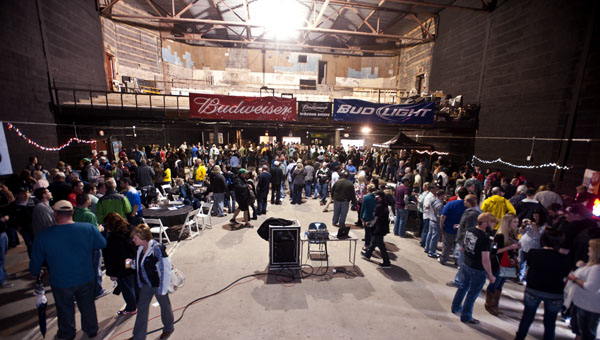 Beer enthusiasts gather inside the Ro-Na Theater on Saturday for the Great River Craft Brew Fest in downtown Ironton.

The inaugural Great River Craft Brew Fest Saturday afternoon at the Ro-Na, sponsored by the Ironton area Kiwanis Club, Ironton aLive and the Friends of Ironton, was a success, as tickets for the event were nowhere to be found not long after the start of the event.

“Over 300 people out of 500 total tickets got their tickets in advance and the walk-ins have been great,” Steve Call, president of the Kiwanis Club and co-organizer of the event, said. “Our expectations have been succeeded and there is a lot of energy in the building.”

Ohio brewers represented included Mt. Carmel, Morlein, Mad Tree and Rivertown out of Cincinnati, the BrewKettle, Great Lakes and Fat Head’s out of Cleveland, Homestead out of Heath, Elevator out of Columbus, Hoppin’ Frog out of Akron, Jackie O’s out of Athens and the Portsmouth Brewing Company. Brewers from out of state included Deschutes and Morlein of Oregon, Sweetwater of Georgia, Goose Island from Illinois, Bells from Michigan and New Belgium out of Colorado.

Each person received five tickets to sample beer with their entry ticket and it was $10 for five additional sampling tickets after that.

Ironton resident Angie Martin isn’t new to going to beer festivals as she said that she goes to several a year.

“I think it’s great to taste different varieties of beer and meet some of the different brewers,” she said. “This one is excellent because it gives people a chance to try some different beers that they wouldn’t normally try.”

Call said he is the one who thought of the idea to have the beer fest in Ironton, and then went to the different organizations to start planning it out.

“I was up at a football game at OU last fall and saw a sign for a beer fest in Portsmouth,” he said. “When I saw that, I thought Ironton can do that. We needed to team up with different organizations and I thought that the Ro-Na was a great location to have it.”

During the event, music was played by Big Rock and the CandyAss Mountain Boys, Blue Vine, Ultra Sound and Mothman. Food was provided by the Ironton Buffalo Wild Wings and Giovanni’s of Ironton.

Mark Bivenour, executive vice president of the BrewKettle, said he loves doing these events and they are in the early stages of possibly bringing a BrewKettle restaurant to Ironton.

“We travel around the state of Ohio and do all kinds of community events. We want to show our support as much as possible and it’s an opportunity for us to introduce our beers to the community,” he said. “We don’t know for sure yet, but we have talked to some of the city fathers and council members about bringing a restaurant down here. We’ve been shown some properties and things, but it is still in the preliminary stages. We love Ironton for supporting us and welcoming us in the community, and are very humbled that they would let us do something like that.”

Call said he hopes this event will help out all of the businesses in Ironton and that next year’s event is already a go and will be April 29 and 30.

“Hopefully they can walk around downtown and go to some of the shops downtown while they are here and more importantly come back another time,” he said. “Next year, we will have a special event on Friday night and then have the regular beer fest on Saturday.”

All proceeds from the event will go toward Kiwanis Club projects and the Friends of Ironton for the restoration of the Ro-Na, Call said.

More than 200 pounds of medicine dropped off