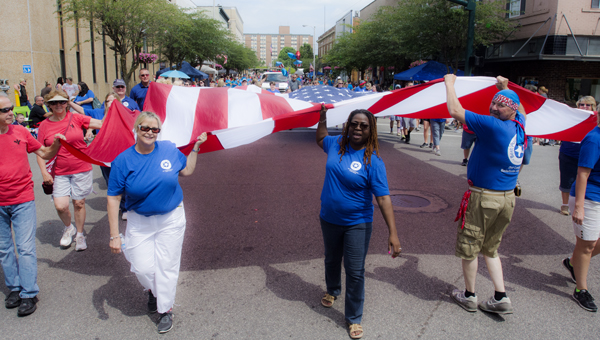 The 148th annual Ironton-Lawrence County Memorial Day Parade took over the streets of downtown Ironton Monday morning, creating the largest ever turnout to the event as well as the most participants.

Thousands of people lined the route to honor those who served, while taking in the country’s longest running parade.

“I think the parade went very well,” Lou Pyles, of the parade committee, said. “It was larger this year than any other year. Our second division doubled and we had a lot more vets and other people participate in the parade this year, and a lot more spectators along the street. We’re happy it was attended so well.”

Pyles said the parade committee was happy to see improved veteran and youth involvement in the parade this year.

“A lot of people know freedom isn’t free. A lot of sacrifices are made for us to live in this country the way we do, and I think our veterans want to become more active and be in the parade,” she said. “There was also a lot more youth who participated this year. It’s good to see young people so involved, so it continues to be a tradition that’s passed down.”

For David Willis, of Barboursville, West Virginia, attending the parade has been a constant for most of his life.

“Growing up in Coal Grove, I’ve been coming here about 50 years,” he said. “I enjoy meeting people down here and watching the kids get candy.”

Air Force veteran and Kitts Hill resident Merrill Humphreys said he also has been coming to the parade for more than 50 years, and takes a lot away from the parade.

“You get to see a lot of people you haven’t seen in a while, visit and enjoy good, clean fun,” he said.

Pyles said she started working on next year’s edition of the parade in March, and has been working on the 150th parade, set for 2018, for a few years already.

“It was a good day for the parade,” Pyles said. “Everything went great.”

It took five years, but Ohio legislators have stepped up to the plate big time. Last week, it was officially... read more