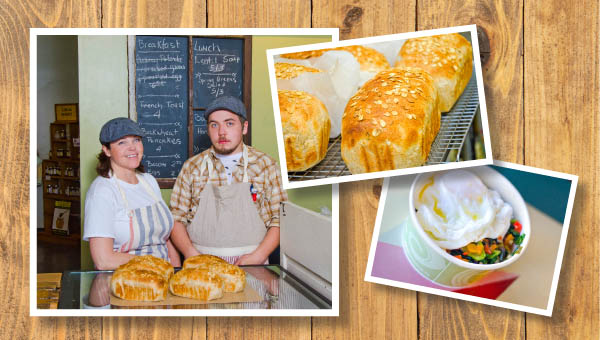 April Hackworth has made a name for herself among customers at The Wild Ramp in Huntington, and after years of prompting to start a restaurant from those that have tasted her cooking, Hackworth has opened Farm to Table Cafe inside the community market.

Whether it’s because of her crowd-pleasing cinnamon rolls, chocolate zucchini muffins, fresh baked breads or handpicked produce, April Hackworth has made a name for herself among customers at The Wild Ramp in Huntington, and after years of prompting to start a restaurant from those that have tasted her cooking, Hackworth has opened Farm to Table Cafe inside the community market.

“I just love being in the kitchen,” Hackworth said. “I love cooking and baking. My grandmother was a cook, and I spent a lot of time with her. I also did some catering in Houston, cooked for friends and large parties. During the summer and on weekends I was always cooking.”

She doesn’t mind getting her hands dirty outside, either.

“I always had a garden, even as a kid,” Hackworth said. “My dad was into it, and so was my grandfather.”

It was produce that got Hackworth started at The Wild Ramp as a producer, but she quickly expanded into other things.

“I had this excess of zucchini, so I made a chocolate zucchini muffin,” she said. “It took off, and people loved it. Then, I got a request for rye bread, and I went on to other breads by request.”

That’s something she’ll continue at the cafe.

“We’ll be baking here every day,” Hackworth said. “There will be fresh bread every morning. All of our sandwiches will be made with it.”

There will also be scones, muffins, and on occasion, her signature biscuits and gravy and sought-after cinnamon rolls .

“If it’s a cold Saturday morning here, I’ll be making biscuits and gravy,” Hackworth said. “I’ll do cinnamon rolls on the first Saturday of the month starting out, but we’d like to do them once a week eventually.”

Hackworth submitted a business proposal late last year when the market began looking for an occupant to take over when the Broken Coffee Mug’s lease expired.

“I immediately thought of April because of how she is with customers; she did our Cinnamon Roll Saturday,” said Shelley Keeney, (former) market manager at The Wild Ramp. “She’s really warm and inviting and because she’s a producer herself she understands our mission and how important it was to source local food from farmers. We all kind of encouraged her to do it, and we’re so excited. We’ve wanted something like this since we started in 2012. This was kind of our vision.”

“We’ve really been working on this since November,” Hackworth said.

By Hackworth’s side is her son, Charles Hurst, an Ashland Community and Technical College culinary graduate.

“He’s the chef,” Hackworth said. “My goal is, hopefully, one day it can be his.”

For now, though, the mother-son team is working together to whip up a small, rotating, made-from-scratch menu of breakfast (think muffins, scones, egg sandwiches, granola, smoothies), lunch (gourmet grilled cheese — the bacon apple cheddar is a favorite already — salads and soup) and Friday night pizzas with what’s available that day.

“What sets us apart, with the pizza, for example is that I make my own Italian sausage from venison,” Hackworth said. “I’m trying to perfect yak pepperoni, too.”

If that her peaks her customers’ interest, then Hackworth has done her job.

“We’re trying to utilize ingredients from here (The Wild Ramp) and make it different,” she said. “Our goal is that 65 percent of our ingredients come from The Wild Ramp producers. We’re working towards 75 percent local in total.”

“We don’t hold things over to the next day,” Hackworth said. “Once it’s gone, it’s gone.”

Despite some initial hesitation and a bump or two in the road, Hackworth believes she’s found the right spot for her and Charles. “I do think it was meant to be,” she said.

A daily menu and list of featured farms is available www.facebook.com/FarmtoTableCafeTWR. Call 606-694-0299 or email Farm2TableTWR@gmail.com for more information.

Since 1997, Suter has been the senior lecturer of art and campus program liaison at OUS. OUS professor encourages students... read more