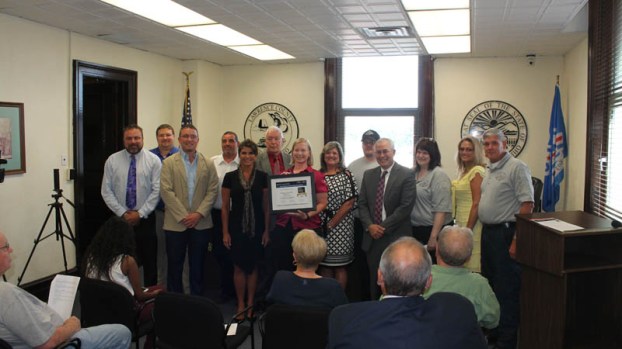 Agency recognized for award at meeting

The resolution requests the commissioners to request the current assessed valuation of Lawrence County and an estimate of the amount of revenue that would be produced by a two (2)-mill tax levy outside the 10-mill limitation for the purpose of Emergency Medical Services from Lawrence County Auditor Jason Stephens.

The proposed levy is an additional levy that would be placed on the ballot at the Nov. 7, 2017 election.

Also at commission, the American Heart Association’s Mission: Lifeline Gold Plus award was given to Lawrence County EMS.

Cynthia Keely, American Heart Association Mission: Lifeline director, was in attendance to present the award to Fry as well as other EMS personnel present.

The Mission: Lifeline program focuses on heart attack treatment, with Gold winners achieving 75 percent compliance for each required measure for two years. Gold Plus winners, including

Lawrence County, achieved beyond 75 percent compliance, and make up less than one percent of all EMS agencies in the nation.

The county commissioners, along with several hospital leaders who were also in attendance for the award, congratulated Lawrence County EMS on its achievement.

• Approved and signed the participation agreement between CCAO Service Corporation and West Publishing Corporation to be utilized by the Lawrence County Department of Job and Family Services Child Support Enforcement Agency from June 1, 2017 through May 31, 2019.

• Received and filed the Grant Closeout Letter for the Lawrence County Airport. The grant closeout date was May 15, 2017, and the final grant amount is for $527,384.

• Approved a resolution to issue a Request for Proposal for energy service providers for self-funding energy efficiency improvements for the Lawrence County courthouse and grounds in accordance with Ohio House Bill 295.

Donations lower than expected CHESAPEAKE — Funds for the village park in Chesapeake have been running low and council voted... read more