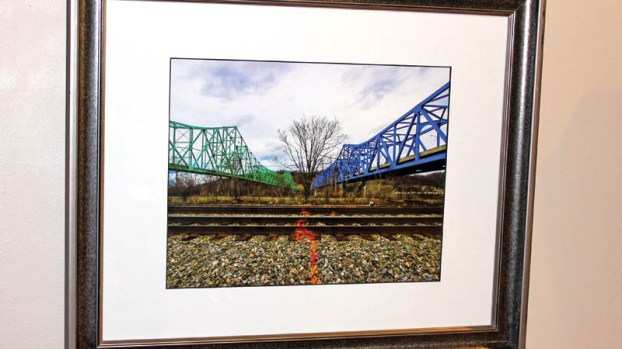 “The Tree Between Two Bridges” is just one photograph by Ironton photographer and Tri-State Camera Club member Jesse Gannon currently on display at the Highlands Museum in Ashland. The 50-member club's display "Backyard Beauties" is up at the museum until Saturday, Aug. 13.

Through the camera’s lens

Tri-State Camera Club has display at the Highlands Museum until Aug. 13

The Tri-State Camera Club began in January 2016 as a group of photographers and people who enjoy photography throughout the Tri-State, and the club’s first big display is currently going on at the Highlands Museum and Discovery Center, where photos club members have taken are being shown.

“We have 50 members currently in the club,” member Jesse Gannon, of Ironton, said. “This is definitely the biggest event that we’ve done.”

Gannon said he’s been shooting photography for the past five years, but has only been really serious about it for the past three.

The display at the museum is called the “Backyard Beauties,” and features several landscapes, scenes, nature close-ups and more. It will be on display until Saturday, Aug. 13, with some of the pieces up for sale.

The Tri-State Camera Club meets at 7 p.m. the first Tuesday of each month on the fifth floor of the Bellefonte Center in Russell, Kentucky.

Gannon said the club takes field trips and has different speakers each month, and interested new members are always welcome.

Aside from the show at the Highlands Museum, Gannon was also chosen to be in the Art Walk in downtown Lancaster, outside of Columbus, which takes place from 6-9 p.m. Friday, with the art work being displayed for a week following.

“I was one of the regional artists picked to be a part of this,” Gannon said. “The Art Walk is in downtown Lancaster, and takes up about six or seven blocks. Each business sponsors an artist and displays their work.”

City mission shelter to be renovated