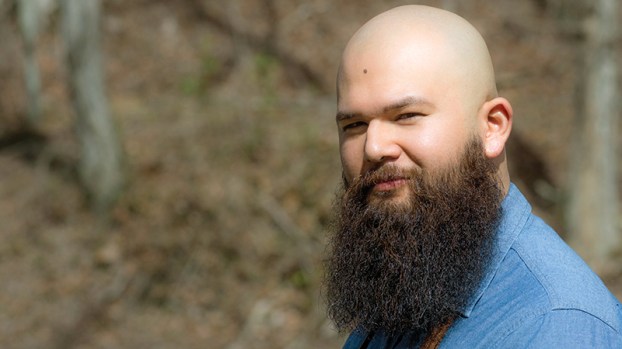 When you picture a guy who creates skin care products, Ryan Klaiber probably isn’t what you picture. Photography by Jessica St. James.

When you picture a guy who creates skin care products, Ryan Klaiber probably isn’t what you picture.

He sports an impressive beard. He dresses like he’s going to do some woodworking. His workshop is a concrete block building next to his house in the woods of Lawrence County. It seems like an unlikely place for the hand mixed, all-natural creations of Ohio Furnace Beard Company.

But Klaiber isn’t some trendy hillbilly hipster trying to jump on a trend of making goods and products for other bearded guys looking to be ironically cool by looking rustic.

“No, not what-so-ever,” he said. “There is something that has really intrigued me about the old school guy who was a man of faith, he took care of his family, and still a man of virtue and integrity. Everything like that, and what I aspire to be, is infused in our products.”

He describes himself as a typical Appalachian guy. He works in the mill at Steel West Virginia and enjoys hunting and fishing. But he was distressed that so many guys in the area just forget about their image. That they would settle for a pullover shirt and using whatever products they find at the store.

Klaiber believes that over the past couple of generations, men have lost touch with the “manly arts.” Lost touch with being able to make stuff with their hands, to repair things, and to be the guy that knows how stuff works. Guys like his great-grandfather Walter, who was known as the guy who helped build houses and was good working with his hands.

“I don’t know if it is just this region, but a lot of guys seemed to forget about their image,” Klaiber said. “They just kind of let themselves go. With this company, I wanted to bring back the American-made man. It’s okay to take care of yourself.”

That ethos of working with his hands is what lead to Klaiber creating his skin and beard care line and ultimately to starting     the Ohio Furnace Beard Company in January 2016 to sell his products nationwide.

After growing the beard five or so years ago, Klaiber noticed he was getting dry skin and his beard felt brittle.

After a tip from his brother, he got some beard oil. The product was OK but not what he really wanted, so he started doing research and thought it would be simple enough to just go ahead and make his own.

He bought some carrier oil and essential oils. Then he and his wife Jennifer set off experimenting with oils on the kitchen stovetop. Turns out it was more complex than he thought.

“I use 20-25 essential oils, that’s where it all comes into play. You have to know X and Y to get Z,” Klaiber said. “That can be frustrating and time-consuming and expensive when it comes to the essential oils.”

But with more research and more experiments, they started getting the recipes that worked and he liked.

“It’s little more of a science than people would give it credit for,” he said, admitting that science class bored him when he took it in high school. “With the butters, there is a flash point when you’re cooking it that will actually burn out the scent.”

From beard oil and shave oil, Klaiber expanded to pastes and balms. His product line is strong with scents that evoke the smell of lumber, smoke, iron ore, tobacco and citrus. And for his clients who hunt, there is White Tail beard butter that smells like nothing, so it doesn’t scare off the deer.

Klaiber wanted scents that were both for men and for more than just riding the latest scent trend.

“Even your quality products at big stores, even their high dollar stuff, it is just made for a season,” he said. “I think our stuff is fairly priced. I know there is stuff that is cheaper, well, I’d rather pay money for a good product that is well made and made by hand. This isn’t stuff that’s made in some factory somewhere.”

That applies to the products he sells that he doesn’t make, like a leather kit bag, which is made by a guy in Columbus under the name of Open Hand Leather.

“It’s just one guy, he does it all by hand,” Klaiber said. “That’s what America needs, good products made by small businesses.”

He said from a goods and manufacturing standpoint, there needs to be more quality local products.

“You get on Facebook or Instagram, there are shops all over that are dedicated to quality American made products,” Klaiber said. With that, he knows there is only so much demands locally, so the Internet has helped his products go nationwide.

“The majority is online through our website,” Klaiber said. “We get flooded on the website, we are shipping products every week.”
Ohio Furnace Beard Company products are sold to people in the area and even as far away as California. The farthest away he has shipped is to Afghanistan.

Their Web site is ohiofurnacebeardcompany.bigcartel.com.

“If we didn’t have an online shop, this wouldn’t exist,” he said, motioning around his workshop. “Heck, I’ve lived here all my life and I’m still finding businesses that exist here in Ironton.”

There are three places in the region that carry Ohio Furnace Beard Company products: Bare Arms Training Facility in Ashland, Champions Barbershop in Louisa and Montgomery’s in Gallipolis.

Klaiber’s  “working with your hands” philosophy extends to more than just the products.

When the orders for products started coming in, Klaiber knew it was time to have a dedicated space.

“We saw that it was growing in to something that almost couldn’t be contained, the kitchen was out of the question,” he said. “It was an absolute train wreck.

So he spent a week cleaning out an outbuilding that was just filled with junk.

“I built the counter myself for this work shop. The shelves were already here but they were dirty, nasty. There was no electric,” Klaiber said. “Went out and got paint, cleaned it out, ran some electric and threw everything in here.”

The decorations are sparse and, of course, manly. There is an advertisement of an old-timey boxer selling pickles. There is a sword. There is a string of Edison-style light bulbs for illumination.

Eventually, Klaiber would like to open up his own shop and sell not only his own products, but boots and clothing as well.

“Something like a modern version of LL Bean, where we sold adventure gear and hiking gear. A good shop with quality hand made goods.” he said. “There are local craftsman who make great things by hand. That would be awesome if I could do that one day but the mill is a really, really good job.”

Imel’s Greenhouse has been an institution in Greenup County, Kentucky, for four decades. Kenny Imel began the business on his... read more