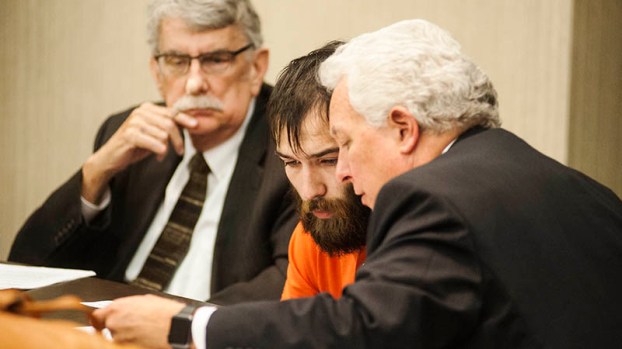 Arron Lawson, 23, of Pedro, suspect in a quadruple homicide in Decatur Township last Wednesday, talks with his lead defense counsel, Kirk McVay, of the Ohio State Public Defenders Office, at his arraignment in Lawrence County Common Pleas Court on Friday. Lawson entered a not guilty plea to all 13 charges against him.

Arron Lawson, 23, of Pedro, suspect in a quadruple homicide in Decatur Township last Wednesday, pleaded not guilty to all 13 charges against him in Lawrence County Common Pleas Judge Andy Ballard’s courtroom Friday during his arraignment.

All four Aggravated Murder charges, and a few other charges, also carry several specifications. Read more about the charges and specifications of the indictment here https://www.irontontribune.com/2017/10/18/suspect-in-quadruple-homicide-indicted-by-grand-jury/

The four Aggravated Murder charges with the specifications carry a maximum sentence of death by lethal injection, with the other charges carrying several year prison sentences if convicted.

Lawson and his defense counsel indicated that he understood the charges against him and the penalties associated with such.

The state is represented by Lawrence County Prosecutor Brigham Anderson, who said he intends to pursue the death penalty in this case, and Angela Canepa, of the Ohio Attorney General’s Office Special Prosecutor’s Unit.

Representing Lawson are Kirk McVay, assistant Ohio state public defender, of Columbus, as lead counsel, and attorneys Warren Morford and Gene Meadows. McVay is serving as lead counsel because he is certified to take on Ohio capital punishment cases.

Under Ohio law, a trial is required within 90 days of the arraignent. However, Lawson waived this right to allow sufficient time for defense counsel and the state to get everything in order before the trial begins.

Arron Lawson, 23, of Pedro, suspected Decatur Township quadruple homicide killer, pleaded not guilty to all 13 charges against him... read more