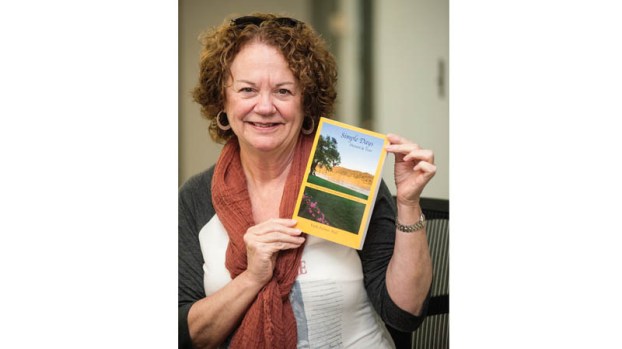 Lawrence County resident Vicki Palmer Hall, author of “Simple Days Honest and True: My Appalachian Roots Realities and Reasonings,” will have a book signing from 2-4 p.m. at the Ironton library.

Vicki Palmer, a Lawrence County resident and now author, will host a book signing for her first book, “Simple Days Honest and True: My Appalachian Roots Realities and Reasonings ” Tuesday at the Ironton branch of the Briggs Lawrence County Library.

The book is a memoir, and the chapters cover several different subject matters relating to Palmer, including Hometown, Childhood, Manic Depression, Cancer, Marriage, Teaching and Oscar, her 10-year old English Bulldog who failed to survive a lifetime of illness and injuries just as the book was being completed.

“I’ve always wanted to write. I’ve thought about doing it for years, but I never really had the time until last year when I broke my ankle in three places” Palmer said. “That’s when I really got serious about writing, and I wrote for about six or seven hours a day. I wrote a good part of the book during that time.”

She added that she signed up for two life writing classes in Huntington, where her teacher ended up being a publisher for Mid-Atlantic Highlands, and ended up publishing the book.

“I thought I was a really good writer until I wrote the book,” she joked. “It was a lot more involved than I thought, but I really enjoyed it.”

Palmer is a Huntington, West Virginia native, and taught eighth-grade language arts in Lawrence County for 28 years. She has a B.A. in Speech and English, as well as a M.S. in English, all from Marshall University.

She said she has plans to write another non-fiction book as well, possibly focusing on parenting and being a grandparent.

Since she has been retired from teaching, she spends her time writing, playing bridge, doing yoga and being with her grandchildren.

The cover of the book features the Ohio River overlooking the West Virginia shore shot from her backyard.

The book signing will be from 2-4 p.m. at the Ironton Briggs Lawrence County Public Library, and copies of the book will be for sale.

City to have regular meetings with EPA At Thursday’s Ironton City Council meeting, they passed ordinances for a temporary budget... read more