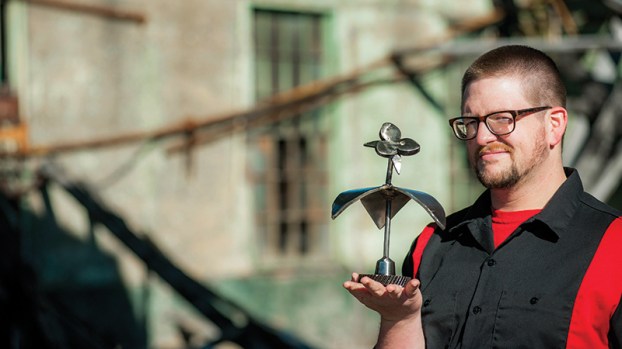 Morris, 26, of Milton and a Cabell Midland High School graduate, began working in metal sculpture about three years ago.

From trash to treasure

Seth Morris says welding runs in his family and, though he has taken a job in the field, it has been at the center of his art.

“My dad and grandpa were both pipeline welders,” he said. “ My dad taught me how to weld, so I have the background. But I’m not in the profession.”

Morris, 26, of Milton and a Cabell Midland High School graduate, began working in metal sculpture about three years ago.

“My grandpa had given me some scrap engines, and I saw these pieces” he said, pointing to the rocker arms from a Dodge that now make up the petal on a flower sculpture. “I thought    they looked cool.”

He said a few years after receiving the parts, he began putting together his first piece.

Morris, who works in retail when he is not doing art and has an education in electrical work, is self-taught, as far as 3-D design and sculpture skills.

The pieces mostly are representative of things found in nature, such a trees, flowers and mushrooms.

“I do native plants,” he said. “I used to go out in the woods and take a lot of photos.”

Morris tends to work in a smaller scale, doing pieces that could fit well onto a tabletop.

“They’re usually about 17 inches or so,” he said, adding that his typical pieces can take from a few hours or a few days to complete. The quick turnaround has made him prolific and he has created about 50 works so far.

He said once a piece is finished, he grinds off the rust and coats them with enamel for protection.

In addition to engine parts, Morris has incorporated bits of lawnmowers and old tools, along with other scrap metal items into his work.

His mushroom sculptures are comprised of valves, the leaves on the plants are made from sheet metal, while the bases on some pieces are from transmission gears.

Morris has sold his work at Heritage Station in Huntington at the monthly Artisan Market, has exhibited at FestivALL in Charleston and has had a piece displayed at the Huntington Museum of Art in a juried show. He is also a member of the Tri-State Arts Association.

He said his output has slowed a bit recently, due to cold weather, as he constructs his pieces outside, but he plans to keep going and producing more.

Though he had done photography, as well as drawing and painting in the past, Morris said he did not set out to be an artist. But he has become adept at his new field and enjoys it.

“It kind of just happened,” he said. “But once it did, it just started flowing.”

For more on Morris and his work, visit Fire and Steel Artistic Creations on Facebook.

Putting on the Glitz

Getting ready for a formal event can be a time-consuming, and an often expensive task, but at Decadence, The Unique... read more