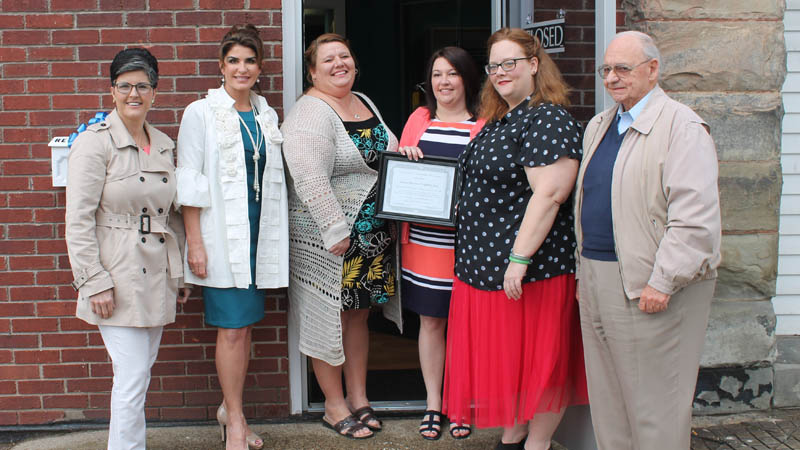 Lawrence County’s fight against the opioid epidemic took another step forward on Tuesday, as the recently opened Groups recovery center hosted a ribbon cutting in Ironton.

Located in the former Goldcamp’s furniture building on Center Street near the Lawrence County Courthouse, Groups provides medication-assisted outpatient treatment with the use of buprenorphine (Suboxone).

“We only admit someone for 18-24 months. What makes us different from other facilities are that most programs that use Suboxone are unlimited,” Groups Operations Specialist Amy Brady said. “It’s to keep them from being sick while they try to get their lives in order by trying to find work and become productive members of society.”

The goal of Groups is to provide effective, affordable and convenient treatment to recover from opioid use in rural areas by combining group therapy and medication-assisted treatment. Bringing everyone together for group therapy, physicians, counselors and recovering opioid users, instead of the recovering user meeting with only a physician, also sets Groups apart from others.

“We’re trying to taper them off within two years to get them clean of everything,” Brady said. “And we only prescribe one week at a time, so members have to come back every week for counseling and to get their drug screen before they can get another Suboxone prescription.”

Brady added that part of the group counseling offered at Groups includes getting members ready for the workforce, such as resume and job skills.

“Members can also get individual counseling as they need at no extra charge, but they’re still required to do group counseling,” Brady said. “We’re also currently working with possible employers in the area to get involved with the program for people to get jobs when they’ve completed the program.”

Brady said that the Ironton Groups location officially opened in February this year, and that currently there are three members with the hope to grow in the future.

She also added that although Groups is not currently working with any of the local courts, she is working toward getting the recovery center recognized by the courts to be utilized.

“We would love for them to start sending us people,” she said. “We don’t accept insurance in Ohio yet, but are working toward that certification. It’s $65 a week for our services, which include counseling, drug screens and the Suboxone prescription.”

Besides Ironton, other Groups locations in Ohio include Athens, Chillicothe, Cincinnati, Circleville, Georgetown, Greenfield, Hillsboro, Jackson, Logan, Middletown and Wilmington, with another location set to open soon in Fairborn.

The Ironton Groups is located at 401 Center Street, and anyone interested in beginning treatment at the center can schedule an appointment by walking in, calling 1-800-683-8313 or by visiting www.joingroups.com.

The Tribune is also hosting a forum on the opioid crisis in Ohio at 6 p.m. Wednesday, May 2 in the Bowman Auditorium at Ohio University Southern.