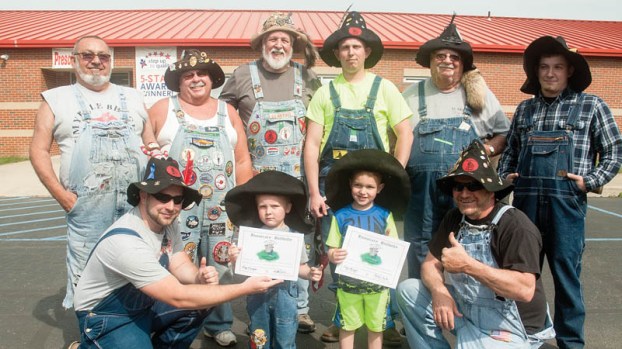 “We send out letters about the penny drive during the first part of April, but some students who know about it start saving early,” Carrie Mullins, teacher at the preschool, said. “We explain to the kids what the Shriners do and how this helps out, and then they go out in the community and try to collect money for the club.”

Roger Morgan, with the local Shriners, said the money raised goes toward the El Hasa Shriners transportation fund, to cover a multitude of things.

“That money pays for transportation for children and their parents to and from hospitals, mostly in Cincinnati or Lexington,” he said. “And that also includes food, lodging, if needed, or any other transportation related expense that may come up.”

There are 94 total preschool students who participated in the “Pennies for Shriners” drive, including 3-year-old Easton Hamm, who was able to raise the most money, bringing in $1,850 since the beginning of the year.

“Easton started saving for this early, and saved all of his “E” dollars for the Shriners,” Mullins said.

She added that all together, the students raised $2,677.77 through the drive.

“It’s really important to us that the kids here do this every year, and South Point Elementary also does it in the fall,” Morgan said. “We’re very appreciative.”

The main El Hasa Shriners Clan is based in Ashland, Kentucky, but there are several posts of the clan in southern Ohio and eastern Kentucky.

Besides the Ironton and Ashland clans, they are also in Portsmouth and in Paintsville, Pikeville and Morehead, Kentucky.