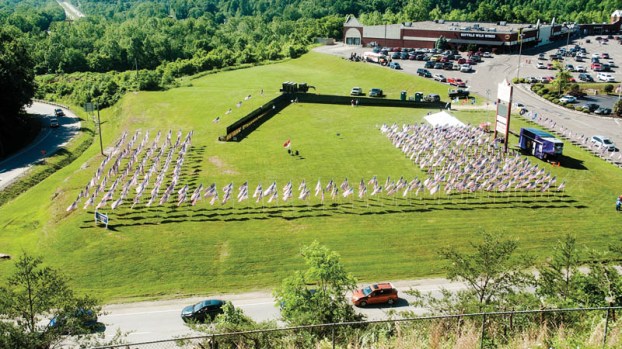 The Ohio Flags of Honor and The Moving Wall are currently on display at the field at Ironton Hills Plaza through the Memorial Day holiday on Monday.

The field at the Ironton Hills Plaza is dressed up for the Memorial Day holiday ahead of the 150th Ironton-Lawrence County Memorial Day Parade, with the Ohio Flags of Honor and  The Moving Wall, a traveling half-size replica of the Vietnam Veterans Memorial.

Gino and Lisa Zimmer, the parents of U.S. Army Specialist Nicholaus E. Zimmer, who was killed in Iraq, started the Flags of Honor Foundation. The Zimmer’s found out about the death of their son on Memorial Day in 2004, and through overwhelming support, created the non-profit, which was originally called the Operation Iraqi Freedom Chopper Fund.

The Ohio Flags of Honor is brought to Ironton by the by the Kentucky VIII Chapter of the Blue Knights, a non-profit fraternal organization comprised of both active and retired law enforcement personnel who enjoy the common bond of riding motorcycles. The chapter pays for the flags to be brought in for display through donations, which are given back to the Ohio Flags of Honor Foundation.

“It’s a privilege and an honor to be able to have this display for the Memorial Day weekend,” Randy Goodall, member of the Kentucky VIII Blue Knights chapter, said. “We celebrate not only who the flags represent or the names on The Moving Wall, but all of our soldiers.”

Along with the Ohio Flags of Honor, The Moving Wall is also set up honoring all of those who served in Vietnam.

“The founder of The Moving Wall, John Devitt, went to the dedication of the Vietnam Memorial in Washington D.C. in 1982,” Paul Chen, with The Moving Wall, said. “He decided to make a replica memorial for people on the west coast who wouldn’t be able to have the opportunity to see the actual memorial in D.C.”

There are two replica walls that travel throughout the country with Chen and his wife, Kim Chen, making the trips in the Midwest and the east coast, and another couple, Aaron and Lisa Gray, making the trips with the other wall on the west coast.

Chen said that the first showing of The Moving Wall was in Tyler, Texas on Oct. 14, 1984, almost two years after the idea came about, which is how long it took to design and construct the replicas.

“They thought it would go on for about four or five years, showing on the west coast,” Chen said. “But on Oct. 14 of this year will be 34 years.”

Chen said that he began traveling with the wall, along with with his wife, since 2010 when his American Legion Post 1977 in New Lenox, Illinois had it visit.

“My wife and I are the only couple from Illinois to drive The Moving Wall, and only the seventh couple in 34 years to travel with it,” Chen said. “So that’s a pretty big honor.”

The home base for The Moving Wall is in White Pine, Michigan in the Upper Peninsula, where it has been stationed for the past 18 years. Chen said the first stops with The Moving  Wall usually take place around the middle of April with the last stops around Veterans Day.

Repairs and maintenance of the wall take place during the winter.

“I enjoy the people mostly. Every stop is an emotional stop, and we’ve never missed a stop since we’ve started” Chen said of his favorite part about being involved with traveling The Moving Wall. “Right now, there are 58,318 names on the wall. We added three names this past weekend, and we are always current with the actual Vietnam Veterans Memorial in Washington D.C.”

Both the Ohio Flags of Honor and The Moving Wall will be on display at the Ironton Hills Plaza through Memorial Day on Monday.