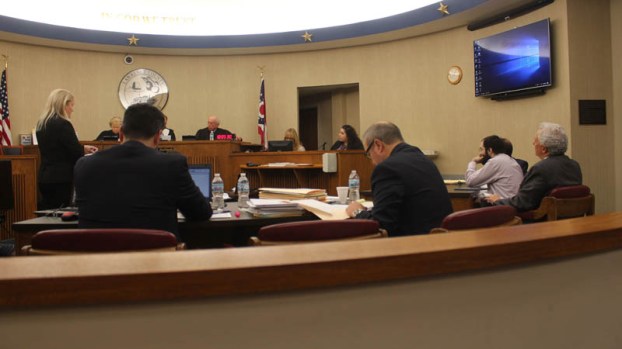 Mitigation in case to begin Tuesday

The third day of the trial against a 2017 quadruple homicide suspect wrapped up Monday evening, where Arron Lawson, 24, of Pedro, was found guilty of all of his charges but that of rape, along with its aggravating circumstance.

The three-judge panel, which consisted of Lawrence County Common Pleas Judge Andy Ballard, retired Cuyahoga County Common Pleas Judge Janet Burnside and retired Brown County General/Domestic Relations Judge R. Alan Corbin, heard the state’s closing argument by Lawrence County Prosecutor Brigham Anderson and the defense’s by Ohio State Assistant Public Defender Kirk McVay, and ruled that Lawson was guilty of all four aggravated murder charges, all unclassified felonies, along with the multiple specifications, for the deaths of his cousin, Stacey Hoslton, 25, her son Devin Holston, 8, her mother, Tammie McGuire, 43, and Tammie’s husband Donald McGuire, 50, attempted murder, a first-degree felony, felonious assault, a second-degree felony, aggravated burglary, a first-degree felony with a gun specification, abuse of a corpse, a fifth-degree felony, kidnapping, a first-degree felony with a gun specification, tampering with evidence, a third-degree felony, theft of a motor vehicle, a fourth-degree felony, and failure to comply with the order or signal of a police officer, a felony of the third-degree.

Lawson was found not guilty of the rape charge and its specification after McVay argued that his client was overcharged with rape, as well as the abuse of a corpse charge, which both stemmed from the same victim, Stacey Holston.

Those who took the stand on Monday included Lawrence County Sheriff’s Detective Sgt. Aaron Bollinger, who finished his testimony from Friday, and Hallie Dreyer, a forensic scientist with the Ohio Bureau of Criminal Investigation (BCI).

While Dreyer was on the stand, she talked about all of the DNA found at the scene, including whose blood was where throughout the residence, that Lawson’s semen was found in a condom obtained from the kitchen trashcan, as well as was present in Stacey Holston’s vagina and rectum, that Todd Holston’s blood was on the knife used in his stabbing, and that the socks that were found in the McGuire’s Chevy S-10 pickup truck that Lawson took off in after the slayings were in fact his.

Day four of the trial is set to resume at 9 a.m. Tuesday with the mitigation phase. The defense is set to call up a few witnesses to testify why Lawson should not receive the death penalty in the case, which Anderson and the state are seeking.