Vikings face Mohawks in battle for SOC I football championship 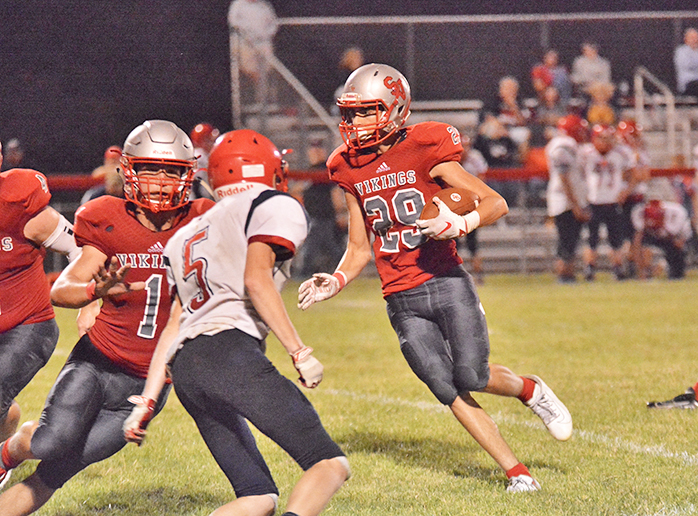 Symmes Valley Vikings’ Ethan Patterson (29) gets a block from Josh Ferguson (1) as he picks up yardage in a game earlier this season. The Vikings play at Northwest on Friday in a game to determine the Southern Ohio Conference championship. (Robert S. Stevens/The Gold Studio in Ironton)

WILLOW WOOD — When it comes time to settle the Southern Ohio Conference Division I championship Friday between the Symmes Valley Vikings and Northwest Mohawks, the outcome may not take very long.
Both the Vikings and Mohawks are ground-oriented and won’t throw more than an average of two passes a game.
“This game might not take two hours to play,” said a joking Vikings’ coach Rusty Webb.
“Both of us want to run it. It’ll just be which team can stop the other. We have a good idea of what they’re going to do and they have a good idea of what we’re going to do. What this will come down to is defense and special teams.”
Symmes Valley is 8-1 and vying for a postseason playoff berth in Division 7. Northwest is 6-3 and is a Division 5 school. Both are 4-0 in the SOC and each team has a feature running back.
The Vikings have 1,000-yard rusher Josh Ferguson (5 -10, 175) while Northwest counters with sophomore Brayden Campbell (5-8, 165).
Earlier this season, Campbell had a huge game in a 67-32 win over Green when he ran 19 times for 360 yards and scored nine touchdowns.
His final scored came on a 1-yard run with 9:03 to play that capped the game’s scoring.
“They have two main running backs with Campbell and (junior Nathan) Rivers (5-9, 180). But they have a size advantage like most teams do against us,” said Webb.
“We’re fairly evenly matched. Both of us are young, but with 55 players they have a little more depth than us.”
Sophomore Austin Newman (6-2, 180) is the quarterback and Webb said “he does a nice job of directing the offense.”
When the two teams met in the final game of the season last year, the game was played in a driving rain and Northwest won 32-26 in four overtimes.
“There’s no ifs or what might happen when the game is over. The winner wins the SOC. As an athlete or a coach, that’s all you can ask for,” said Webb.
Symmes Valley Vikings
August
31 at South Gallia 14-12
September
6 FAIRFIELD CHRISTIAN 37-0
13 CHESAPEAKE 6-49
20 at Fairview, Ky. 50-7
27 at Sciotoville East 47-6
October
4 GREEN# 7-0
11 at Eastern# 38-14
18 SCIOTOVILLE EAST# 39-8
25 PRTS. NOTRE DAME# 33-0
November
1 at Northwest# 7:00
#-Denotes SOC game