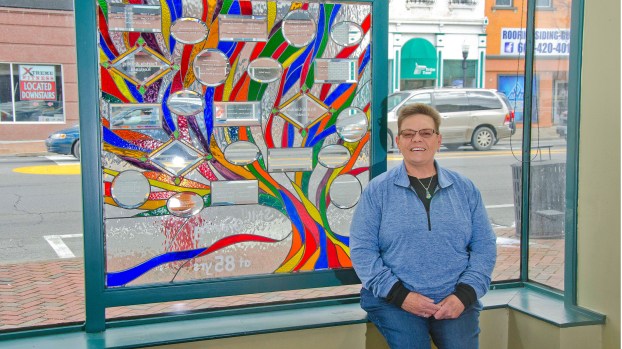 Diamonds dance in the sunlight that flashes through the front windows of the Paramount Arts Center in Ashland.

The trees are simple, majestic and symbolic, created out of  a commission Eoff received from then PAC director Norma Meek.

Meek, gearing up for the performing arts center’s 85th anniversary in 2017, wanted to honor contributors to that special celebration. Meek knew what she wanted and definitely what she didn’t want.

“I got to thinking, 85 years, that’s old. A tree is old. A tree starts as a seed. A seed finds its place and becomes established and keeps growing.”

So Eoff let Meek’s ideas dance around with her own.

“I always want to put my own spin on things,” she said.

Her reasoning is simple.

“It’s a Debsterpiece instead of a masterpiece,” she said.

Out of Eoff’s seeds of creativity sprang two stained glass paintings of trees that now live in the PAC’s Winchester Avenue windows.

But before Eoff could begin cutting into 36 by 36 inch or 48 by 24 inch sheets of green, blue, red, gold or brown glass, she had another challenge.

With the board’s blessing, Eoff picked up her brush — or rather an oil-fed swivel tip cutter — to begin painting with glass.

With sheets of glass stacked up in her home, Eoff took an aesthetic trip back in time to meet with an art form that some say dates to ancient Egypt. It had a Golden Age in the 12th and 13th centuries when European cathedrals sprang forth in their glory. Appreciative of the history of her art, Eoff attacked her paintings simplistically.

Creating her art from glass, Eoff reaches for a medium that comes out of a chemical recipe.

The ingredients for glass are combined and fired red hot. Into that are dropped metallic oxides that create the colored glass.

After Eoff’s designs were approved, she sketched them onto poster board. On top of that, she laid tracing paper onto which she reproduced the design again.

That done, she cut the tracing paper into the individual shapes that would be placed on the glass sheets.

Then she went to work.

“My dining room, my kitchen I use as my studio,” she said. “You don’t often meet someone who has a compressor in her living room. I put the stereo on and it’s just me and my cats.”

Her cats — Frank and Effie, named for her great-grandparents — have adapted well to having an artist as their owner and their home transformed into part-studio-part manufacturing site.

“If they could only cut glass and solder,” Eoff said.

The Springfield, Mo., native came to Ashland in 1980 already well-trained in her art.

“A man in Springfield took me under his wing,” she said. “He had a stained glass business and he wanted someone to teach.”

After teaching her the basics, he led Eoff into design, a natural progression for her.

For the past 15 years Eoff’s day job has been with the city of Ashland. But when it’s quitting time she dons her artistic cap and creates.

“What I enjoy most about stained glass is the challenge, the design, bringing out the colors,” she said.

And the satisfaction she gets when the client sees the finished product.

“They will have it forever,” she said.” It never fades. It never depreciates. It is a lasting piece.”

It also is a metaphor for the support the Paramount has enjoyed for almost a century.

“It branches in different directions,” she said. “When there are other fundraisers, they can add to this. A tree can grow if it has water. I see the community as the water.”