McGinnis has no doubt that Hillsdale the place for him 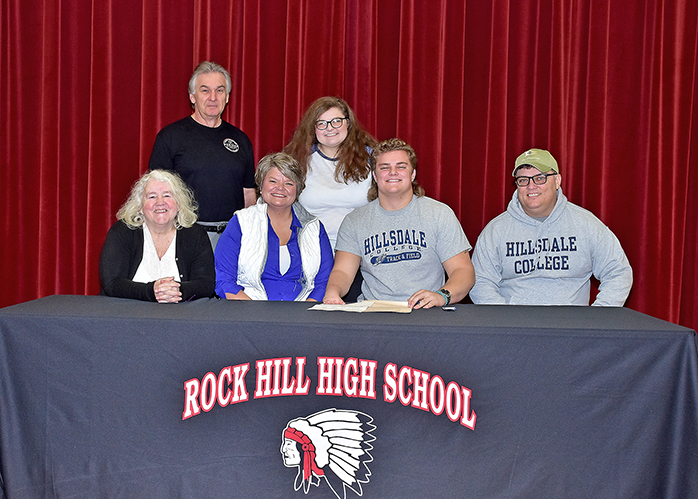 COLUMBUS — T.J. McGinnis doesn’t waste time when it comes to his academics or his athletic workouts, so he didn’t waste time picking his future home.
While most students do extensive research when deciding on a college, the Rock Hill Redmen senior two-sport standout knows right away what his post-graduate plans would encompass.
“I didn’t really talk to any school seriously. I knew Hillsdale is where I wanted to go. They were the first school I visited and they were the first school I fell in love with,” said McGinnis who signed to play track at NCAA Division II Hillsdale College.
Besides being a two-time All-Ohio football player, McGinnis has been one of the best throwers in track the past two seasons.
“Track has always been — in my mind — easier to do and focus on academics because football is a full commitment and you’re always with the team. I wanted to be able to focus on my academics and track is easier on my body. My last two years I broke both my legs,” said McGinnis.
While McGinnis was recovering from his broken leg this past season, he began drinking milk as he went through his daily routine at school to use the extra calcium to help heal his bone faster.
“Actually, it just started off as a joke because of the calcium in the milk. I just walked around with the milk from our training room down to our locker room. I just carried a jug of milk with me and I like milk, honestly,” said McGinnis.
Now that he has healed, McGinnis has turned all his attention to track and he has goals not only for the upcoming season but when he arrives at Hillsdale.
“I’m not sure what (Hillsdale has) in mind for me. I know I want to throw shot put and I think my chances of throwing my freshman year are good,” said McGinnis.
With his recent indoor workouts, the 6-foot-3, 250-pound McGinnis said he has shown extensive improvements.
“(Rusty Smith’s) workouts have been grueling, painful, but they’ve helped tremendously. Before I started working out with him, I couldn’t dunk a basketball. The other day I was in the gym dunking a basketball. It’s insane how much it’s helped,” said McGinnis.
“I hope to make an appearance in the state meet. The goal is always to win the state and I think my chances are good. That’s my main goal, but making an appearance in the state meet would be nice. In the future, I’d like to win a national championship. Honestly, I don’t think it’s out of reach. I think it’s possible.”
Throwing coach Rusty Smith has trained his own sons Jared and Chris, Theresa Sherman, many other Lawrence County throwers as well as worked with Olympic Gold Medalist Randy Barnes.
Smith said McGinnis is among the elite throwers he’s coached.
“He’s right there with the hardest workers I’ve ever had. He doesn’t try to get out of anything. If you try to give him a little break if you think he’s having difficulty because of his one hand, he won’t take it. He’s got to do what everyone else does but he’s got to do it better,” said Smith.
McGinnis began throwing in seventh grade but he said “I didn’t start getting serious about it until high school. I didn’t get with Rusty until the end of my sophomore year. He’s helped me tremendously.”
McGinnis was awarded the Art Teynor Award at the Ohio High School Football Coaches’ Association annual state meeting Feb. 7-8.
The Art Teynor Award is presented to the top football player in the state who overcomes adversity and best exemplifies athletic, academic, community service and character components.
McGinnis was born without fingers on his right hand but he played fullback the past two seasons to go along with throwing the shot and discus in track.
“It’s not really (a handicap). It’s all I’ve ever known. I don’t know what it’s like to not have it,” said McGinnis with a laugh. “It’s normal for me.”
Some previous winners include Ben Roethlisberger (Findlay) in 1999, Ted Ginn Jr. (Glenville) in 2003 and Mitch Trubisky (Mentor) in 2012.
McGinnis was admitted it was a pleasant surprise winning the award.
“Words can’t describe it. I felt like I wasn’t deserving of it but, obviously, (the coaches) thought I was. It was humbling for sure,” said McGinnis.
In a game late last season, coach Mark Lutz was warning against fumbling so he told the running backs to put both hands on the ball.
McGinnis sheepishly interrupted his coach and by raising his hand without fingers. Lutz looked at his fullback and said, “OK, let me rephrase that.”
“Times were stressful so I just decided to ease the tension a little bit by joking around with him,” said McGinnis.

COLUMBUS, Ohio (AP) — A California man pleaded not guilty on Friday to a charge of threatening a shooting at... read more