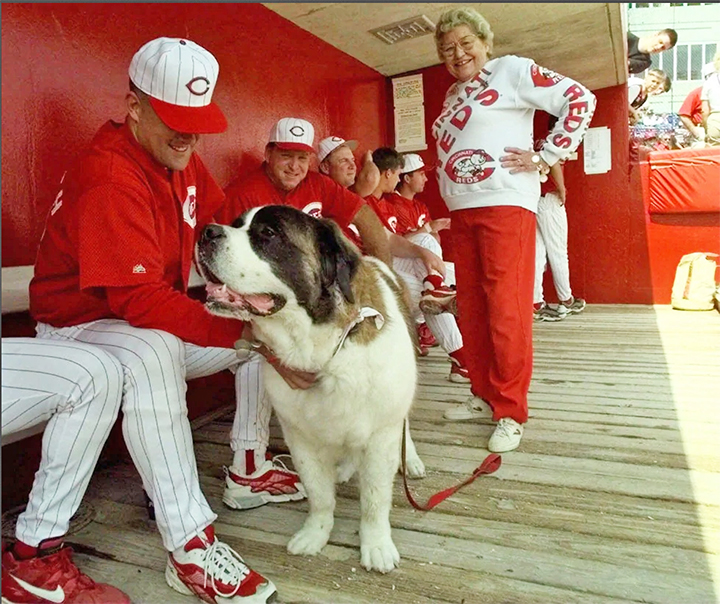 The late Marge Schott (far right) with her dog Schottzie visit the Cincinnati Reds’ players in the dugout prior to a game. Schott, the former Reds’ owner who died in 2004, left $2 million to the University of Cincinnati and the school named the baseball stadium in her honor. However, the school voted to remove her name due to her racist past history.

CINCINNATI (AP) — The University of Cincinnati is removing Marge Schott’s name from its baseball stadium and a library archive in light of her racist comments while owner of the Cincinnati Reds.
The school’s board of trustees unanimously approved the move Tuesday, 12 days after a Catholic high school also decided to remove references to Schott from its facilities.
Over the years, UC students, faculty and alumni have objected to Schott’s name on school facilities, but no changes were made.
“Marge Schott’s record of racism and bigotry stands at stark odds with our university’s core commitment to dignity, equity and inclusion,” said school President Neville G. Pinto, who recommended the change.
The national push for racial justice sparked by George Floyd’s death in Minneapolis has prompted local institutions to revisit Schott’s history.
Former UC baseball player Jordan Ramey started a petition June 1 on Change.org to have the stadium renamed, drawing national attention. Ramey, who is Black, grew up in Cincinnati and learned about Schott’s history of racist comments from his father.
Nearly 10,000 people had signed the petition as of Tuesday. Ramey was gratified by the trustees’ unanimous vote and Pinto’s comments. The school president called Ramey after the decision.
“All our leaders need to have that kind of vision, that kind of outlook, especially with the history we have,” Ramey said in a phone interview. “Our leaders need to acknowledge our history and accept our history and take ownership of our history. That’s the only way we can move forward.
“If we keep denying it, we’re going to pass it along and it’s going to keep going.”
After Schott’s death in 2004, most of her estate went to a foundation that funds a wide range of philanthropic ventures. Her name is featured on many facilities in the city.
As Reds owner, Schott was repeatedly suspended and ultimately ousted by Major League Baseball for her slurs and praise of Adolf Hitler. Team employees said Schott used slurs for Black players and made derogatory remarks about Jews and Japanese. She said Hitler was “good at the beginning” but then “went too far.”
Major League Baseball banned her from the team’s day-to-day operations for the 1993 season and levied another suspension after she returned and continued to make offensive remarks. Ultimately, she was forced to sell controlling interest in the team in 1999.
The university built Marge Schott Stadium with a $2 million donation from the Marge & Charles J. Schott Foundation in 2006. In addition to removing Schott’s name from the stadium, trustees agreed to remove it from a space in its archives library.
“I hope this action serves as an enduring reminder that we cannot remain silent or indifferent when it comes to prejudice, hate or inequity,” Pinto said. “More than ever, our world needs us to convert our values into real and lasting action.”
Earlier this month, Saint Ursula Academy in Cincinnati decided to remove Schott’s name from a science, language and arts building that was constructed with the help of her donation. It also is renaming its athletic facility, which was called “Schottzie Stadium” in honor of Schott’s dog.
Schott’s foundation has encouraged discussions about naming rights.
“While we cannot make excuses for the rhetoric made by Mrs. Schott decades ago, we can ask you to learn from Mrs. Schott’s mistakes as well as her great love for Cincinnati,” the foundation said in a statement this month.
“We appreciate what these great organizations bring to Cincinnati and we fully support the decisions made by the organizations who have received grants from the Foundation.”
Ramey, who recently graduated from UC, was gratified that his petition was so widely shared and signed.
“I’m looking at just under 10,000 people who shared, who signed, who talked about this situation as an injustice,” Ramey said. ”A lot of people feel very strongly about this. I don’t think it’s a celebration. I think we’re moving in the right direction.”