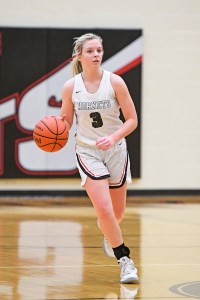 COAL GROVE —Even when the postseason tournament has ended, Coal Grove Lady Hornets’ senior guard Addi Dillow will still be playing basketball.
The 5-foot-6 senior guard has accepted an invitation to play in the Dayton Senior All-Star Classic to be held at 7:30 p.m. on Tuesday, March 16, at Bethel High School in Tipp City.
Dillow was invited to play in the game by Jim Dabbelt who is considered a premier media source in the state for Ohio girls’ basketball and his coverage of sports spans more than 30 years.
He is a well-known sports writer for Prep Girls Hoops Ohio.
“I was really excited, especially after Dabbelt said I was one of the most exciting players he has seen,” said Dillow. “It reflects on all the work I’ve put in and it shows how it’s paid off.
“I’m a little nervous. It’ll be a little different than how I’m used to playing with my teammates and against players I’ve never played against before. But it will still be exciting.”
Dillow’s numbers this season have been staggering. She is averaging 24 points a game along with 5 steals, 4.6 rebounds and 3.9 assists.
She currently has amassed 1,502 career points, just 55 points off the school record.
A four-year starter, Dillow has helped lead the Lady Hornets to three straight Ohio Valley Conference championships.
The game is a collection of the top seniors in Ohio who are put on display to showcase their talents in front of college coaches.
The versatile Dillow also plays volleyball and has already signed a letter-of-intent to play softball for West Virginia State University. She said a good performance in the game probably wouldn’t affect her decision to play softball unless WVSU asked.
“Not at this point. I’ve already signed my letter-of-intent. If I went against it I’d lose a year of eligibility,” said Dillow. “(But if West Virginia State) made me an offer, I’d definitely have to take it into consideration.”
A limited number of tickets will be made available to each player for family members to attend and the game will be broadcast live on the NFHS Network.