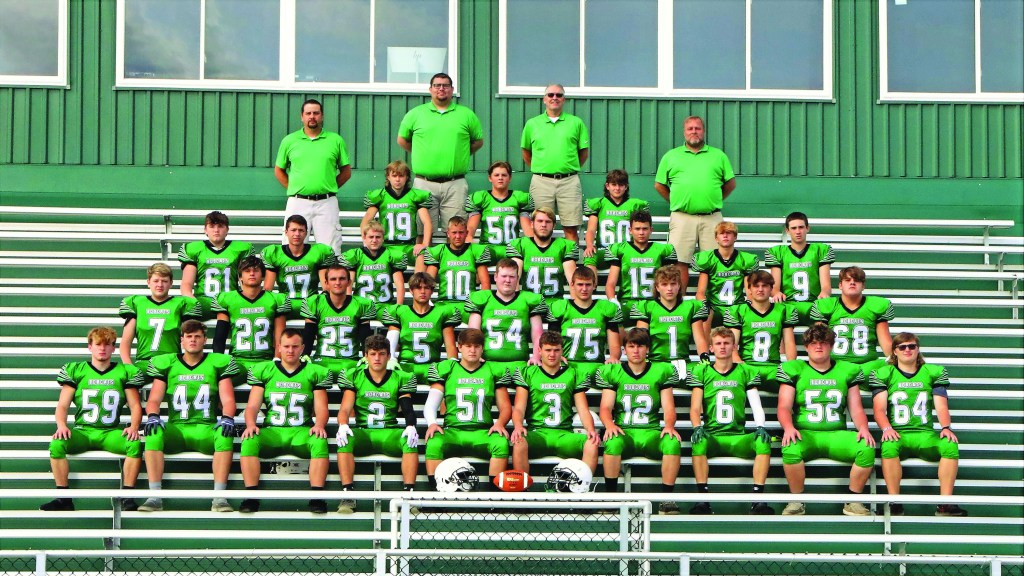 FRANKLIN FURNACE — A 30-man roster? A lot of upper classmen? Quite a few returning starters? Wait. This can’t be the Green Bobcats you’re talking about.

For the first time in years, the Bobcats have a veteran team and a plethora of returning starters as they head into the new season that includes the christening of the school’s new football stadium.

Green third-year head coach Chad Coffman had been working his team hard in hopes of capitalizing on a veteran team.

“I don’t know how well we’ll play, but we do have a lot back. We only graduated three,” said Coffman. “The difference is there are lot of teams out there are having a ton of new players.

“One thing that is different this year is we’ve got a lot of freshmen and sophomores who are juniors and seniors. Now, they’ll be playing against guys their own age.”

Junior Abe McBee (5-10, 185) is a good all-around athlete and he will handle the quarterback duties this season.

The backup is Jon Knapp who is a freshman, but Coffman said “he’s 6-3 and weighs 175 and is very skilled.”

Gabe McBee, brother of Abe, is a 6-foot, 195-pound senior who has also played some quarterback before.

The leading candidate at fullback is junior Nathaniel Brannigan (6-0, 195) with Gabe McBee in the mix.

“Nate is really versatile. We’ve used him as the back in the Wildcat, fullback, halfback. Gabe didn’t play last year and he’s looking better and better at fullback,” said Coffman.

Another player who could work his way into some playing time is freshman Uriah Satterfield (5-11, 165). Coffman said it’ll be tough since he’s a freshman but “he’s going to be a really good player.”

“Sparks put on 40 pounds since last year. He played a lot sports last season,” said Coffman. “Brannigan will rotate in there. Blake Smith played a lot in there last year and I expect he’ll play some again.”

Coffman said a veteran offensive line is a major plus. Sitting in the middle of the Green lineup will be sophomore Landon Lewis (6-4, 285). With the exception of Lewis, Green has a smaller but athletic lineup.

Caleb Lewis will be a backup along with junior Cole Maynard (6-0, 190) who started at tackle two seasons ago and last year was a tight end but was sidelined by an injury.

“Cole is a little small but other teams just stared the old game. than he was two years ago. He’s someone we can play in there at guard or tackle,” said Coffman.

Senior Chais Lavender (5-9, 230) has been a two-year starter at guard and moved to tackle. Coffman said his size and experience should help anchor the line.

Junior Braxton Conschafsky (5-8, 170) was the starting center last year and can fill-in in if needed, but he will be the tight end and possibly a little fullback.

“He might surprise people. He’s trimmed down a bit and he’s a lot more athletic. He’ll be one of those tight ends,”

Another tight end will be senior James Hurst (6-4, 220) who didn’t play the past couple of seasons.

Junior Ace Thompson (6-0, 170) is also in the tight end picture but he may play more as a wide receiver.

“Hurst has got the size you like to have at tight end,” said Coffman. “Ace is more of a split end. He’s a junior now and he’s much more physical. He’s gotten a lot stronger so I’m not afraid to play him at tight end.”

Thompson is penciled in at one spot with Lodwick playing wide if he’s not going to play in the backfield.

“(Blevins) is another athletic kid. He’s long and he’s gotten a lot more athletic,” said Coffman. “He should be in the rotation, but I could see him even helping at halfback.”

Senior Levi Waddell (6-0, 160) is another candidate at wide receiver who can also play tight end

The Bobcats will utilize a 4-man front with Isaiah Runyon at one tackle Lavender his running mate. Sowards, Landon Lewis will be in that rotation.

The ends should be Tyler Blanton and Maynard with Hurst in the mix along with Conschafsky.

“We’ll try to play a group of players in there at tackle and end,” said Coffman.

Conschafsky and Smith are the front-runners at the inside linebacker spots with Gabe McBee possibly in the picture.

“Right now I really have three who can play inside, said Coffman. “Braxton can play outside if needed.”

“Sparks may have been my best player on defense last year and Abe McBee brings a lot of high intensity,” said Coffman.

The cornerbacks will have Thompson on one side and Lodwick will be his running back on the other side. Waddell could find himself in the mix as well.

The safety will be Brannigan who Coffman said “can play all over the place. He was probably our second best player. He’s gotten a lot bigger.”

Brannigan will be the punter with Lavender a candidate.

“We’ve got a couple of guys who are experienced punters. Brannigan has the upper hand right now,” said Coffman.

Coffman said he isn’t sure at this stage if the team will go for the two-point conversion or kick the PAT.

With the heavy losses Symmes Valley experienced, Coffman said the league race is hard to predict.

“It’s wide open. Northwest is a really big school so they’re going to have a lot of guys,” said Coffman. “Symmes Valley was a really good team last year but lost an incredible amount of players. I expect Notre Dame to pretty good, Eastern will be better, I think East only lost one guy and will be good.