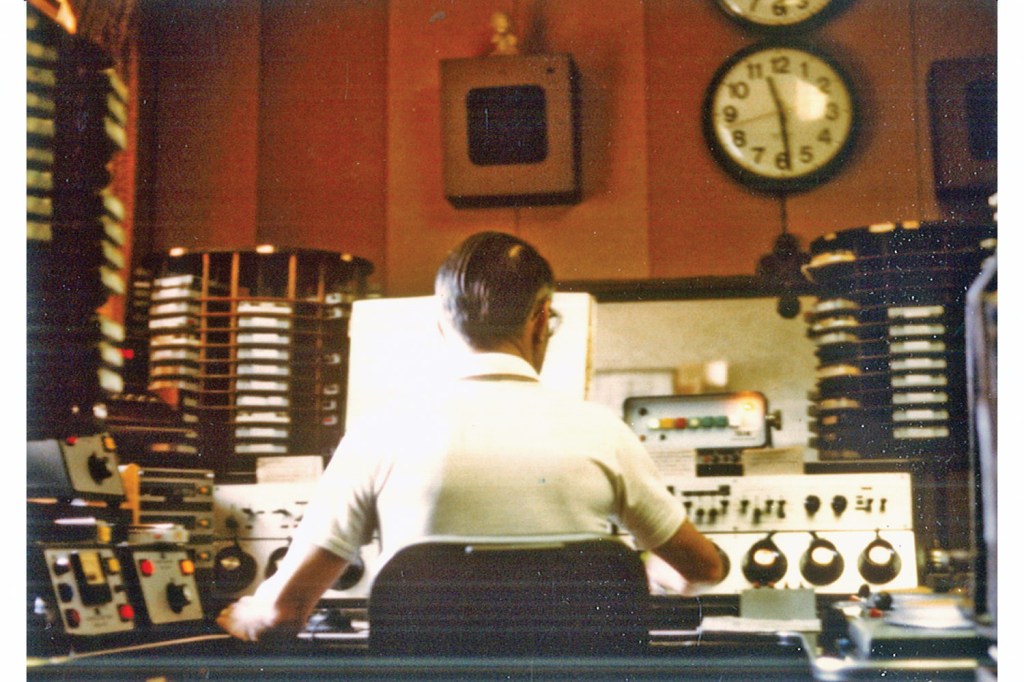 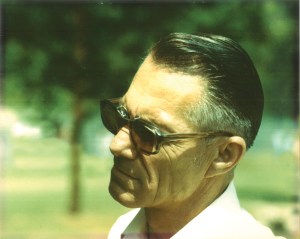 Kenneth H. Auble met Rose A. Harris while he was working at a radio station in Marion. He was from nearby Orrville, Marion was her hometown. They were both 21.

A World War II combat veteran, Ken was just out of the Navy. Practically his first words to his future wife concerned his lifelong goal — to own his own radio station.

“Radio was his dream,” Rose says. But, “Engineering was his first love.”

They married and soon were shopping for radio stations. Returning from a search mission in Florida, the couple stopped by Ironton. There was a radio station for sale there, Rose relates, one with “…an impeccable reputation.”

It was Ironton’s hometown radio station, sitting on a hill overlooking the city, WIRO AM, broadcasting at 1230 KHz with 250 watts of power.

Ken and Rose Auble’s Tri Radio Broadcasting, Inc. officially received FCC approval of the station’s acquisition on Feb. 25, 1962. Ken was the president, general manager and chief engineer. Rose was the bookkeeper and supervisor of the secretarial staff.

“They were great partners in life as well as in radio,” said Ronnie Bell, a key WIRO figure throughout the Auble years.

The couple had three children, Kathi, Jacki and Kenny, all of whom would work at the Big I.

From the get-go, Ken Auble’s steadfast passion was to make the radio station a vital part of its community. He found a firm foundation upon which to build already in place. WIRO, owned by the Iron City Broadcasting Company for the previous 10 years, was deeply invested in its listening community.

Ken kept mining —amplifying the programming, grooming his announcers and taking the station’s vital engineering to greater heights. The Big I’s impact within its 1230 AM footprint grew stronger.

Here’s just the tip of the enormous iceberg: 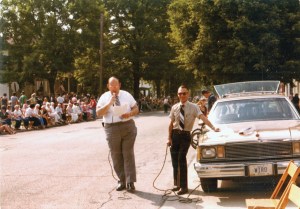 • Catering the popular music of the day for engaging their avid listeners.

• Keeping local news, weather and public affairs reporting up to the minute.

• Maintaining the tradition of airing the live action of the Memorial Day Parade.

• Searching for great on-air talent and giving the DJs a clear path to success.

• Instilling the desire to speak to the heart of the community in all air personalities.

• Driving WIRO’s AM power up to 1,000 watts for greater community coverage

• Transistorizing WIRO’s transmitter — the first locally and maybe the first in the U.S.

“The impact of WIRO on the community was significant,” says Rose Auble. “Between the two of us,” she continued, “We could do everything.”

That is, everything needed for operating the powerhouse radio station on the hill and speaking to the lives of its growing listening family.

Rose also recalls when they trained their DJs, sales persons and secretarial staff, “The first thing was to teach them how to properly pronounce ‘Ironton, Ohio.’” (Long I in Ironton; all vowels in O-hi-o are long.)

Mrs. Auble quickly came to love their radio station and appreciate WIRO’s positive power to affect lives in the local community just as much as her energetic, always-searching-for-his-next-project husband. Even when they made the difficult decision to sell the Big I stations more than two decades later because of Ken’s health, they continued to listen in and took comfort in hearing the stations they took to such prominence because, she says, they “knew (WIRO) was there and doing its job. It belonged to the city of Ironton.”

So, in a timeless and deeply personal sense, did Kenneth H. Auble.

Some of the Boys of the Big I remember:

“Ken had so much energy… and the speed at which he moved around the radio station…!” (Noah Don Adams)

“Ken worked 25 hours a day. Your never knew when he would burst into the control room focused on his engineering. He’d pop in to vacuum the cobwebs out of the transmitter in the middle of my show!” (Mike Tussey)

“He was a meticulous engineer. You could eat off the floor of the transmitter!” (Ronnie Bell)

“Ken treated me like a son. He was firm—he let you know what he wanted—but he had a kind heart and knew how to take a green kid and make him a radio jock.” (Bob Miller)

(Ken had) “a lot of enthusiasm, a lot of trust in this newly-minted DJ. WIRO was never anything but a good time.” (Noah Don Adams) 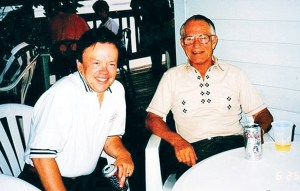 “He loved radio. He was a man to be admired and obeyed! If you were loyal to him, he was loyal to you. He was a fantastic boss.” (Ronnie Bell)

“Ken was fair and kind, always giving a chance and even a second chance to his boys. He set an example of what a great work ethic was. He was in early and stayed late. He was a dynamo.” (Steve Reinhardt)

“‘KL2949 to base!’ That’s Ken calling in on the CB radio in his yellow WIRO station wagon…again! He seemed always to be out there keeping track of what’s going on in the community and listening to what we were doing on the air. He was all about dedication, hard work and professionalism all the time.” (Rick Mayne)

“WIRO was a well-respected radio station that had a huge impact on its communities. Everybody knew Ken Auble. Downtown stores played the station over their store’s loud speakers every day.” (Bob Miller)

“Ken Auble was well-respected in the community and always did what he could to serve them. (Ken and Rose) were loyal to the community, and the communities knew they had a friend in WIRO.” (Ronnie Bell)

“Working for the Aubles was hands-on schooling in radio broadcasting specifically, but in wider terms, (it was) about being a good community servant by owning and operating a successful local business shoulder-to-shoulder with area retail merchants.” (Rick Mayne)

“Local businesses waited in line to sponsor the sports broadcasts the entire town was tuned in to.” (Steve Reinhardt)

“Ken had one steadfast, unchanging law — when you came through the door leave all your troubles at home.” (Ronnie Bell)

“Ken told me, when you’re on the air, don’t ever let your listener know you’re not feeling well. You’re not there to take your troubles to them, you’re there to take their troubles away.” (Steve Reinhardt)

“I learned how to be good to people and, like Ken Auble, sought never to meet a stranger. He had an unending smile and encouraging words. He was full of unshakeable enthusiasm.” (Steve Reinhardt)

“Over the years, after leaving WIRO’s family-style setting—both by chance and by intentionally seeking Ken out—I’d find a way to express my gratitude for having had the good fortune of working through his ‘radio boot camp.’ It served me well every day I called myself a professional broadcaster. I’d do it all over again beginning tomorrow…just the way it happened.” (Rick Mayne)

Late on Friday nights, sometimes following the exhilaration of an Ironton Tiger football game — adrenalin still pumping — Ken put his hands and heart into all-night engineering activities in the Big I studios. Then, at 6 a.m., he put WIRO on the air for his own program — “The Saturday Showcase.” As host, he was “The Eccentric Millionaire.” His theme was Woody Herman’s Woodchopper’s Ball. And somewhere along the way — and anytime he filled in for an air shift—he played ‘Ramblin’ Rose’ by Nat King Cole for his wife and partner. It was their song.

Ken’s on-air persona was, well, Ken, bright and determined. He had a deep, old-timey radio voice. He was always up, always involved and always had a smile in his voice that was clearly discernible on the air by his loyal listeners. 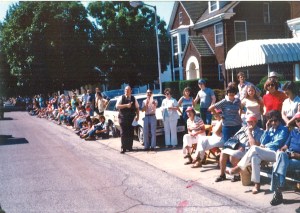 I was an 18-year-old kid still in radio school in the winter of ‘68. I sent Ken an audition tape, which I still have. I sound like a little boy who needs to blow his nose. He hired me anyway.

Ken Auble’s presence permeated everything about WIRO, yet he was sincerely gracious. He was The Boss, but he let me be me. He trusted me. He gave me a second chance when I needed one. And he gave me the freedom to learn and grow. He gave me responsibility and expected me to live up to it. And when it was my time to go, he gave me my wings.

Over the years whenever I returned to the Old Country on a visit, I’d drop by WIRO or knock on the Auble’s front door. They always let me in, were always glad to see me. That kind of respect and friendship doesn’t happen often in life.

My friend Steve reminded me that many times — often after a good day downtown, selling time and making friends for the Big I  — Ken would bounce into the control room, his step jaunty, pipe clenched between his teeth, shining his infectious joy throughout the place. What a gift. What a gift.

Kipper was Ken’s pet German Shepherd. He lived in the station and greeted us at the door.

I came to think of him as Ken’s alter ego, ever happy, eager to interact, encouraging us with his companionship.

The annual staff Christmas party at the Auble’s home was the highlight of our year.

Wonderful food, warm friendship and peace on earth. Ken and Rose gave us a Smucker’s gift box — that Orrville connection —  with a variety of delicious treats, which we all looked forward to. And a bonus check. Everyone was there. Well, not everyone.

Bob Miller recalls his first WIRO Christmas. He was on the air; someone had to be. But Rose Auble prepared him a plate of food and along with his gift box and bonus check, drove up the dark, winding road to Radio Plaza to give it to him in person. Does anyone even do that these days?

Ken Auble was the consummate radio man. By God’s grace, he was my boss during my youth. His professional and personal examples are worthy still of emulation. Thanks, Ken, our good friend, my good friend, for everything.

Mrs. Rose Auble has the final word, as she should.

Written by Gordon Hall. Copyright on work reserved by the author.